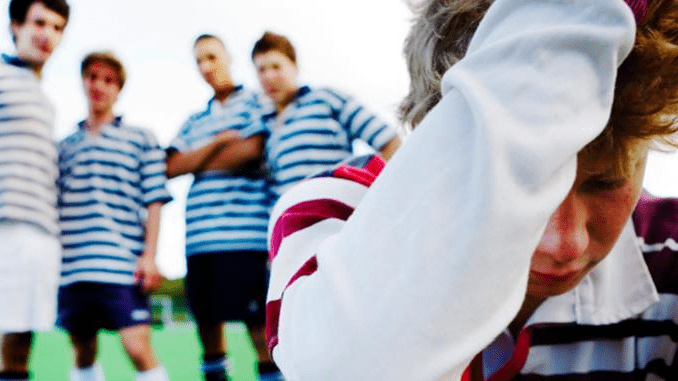 Sports Psychology Tips: Bullying -The Dark Side of Sport

Have you been on the receiving end of bullying?

Bullying is is a verbal or a physical action which can include calling nasty nicknames, threats of violence, taunting to hitting, slapping, and hurting somebody emotionally and /or physically.  On top of verbal and physical bullying there is relational bullying which aims at belittling and embarrassing a person.

Bullying is a frequent phenomenon in multiple fields as well as in sport. Bullying is about athletes’ victimisation and can lead to performance problems, low self-esteem, and mental health issues such as depression, self-harm, anxiety, drug use, risky behaviour and in the worst case scenario suicide.

In recent years, bullying has also assumed the form of cyber bullying which is a type of bullying that includes insults and threats via e-mails, texts and social networks. It can also include spreading personal information or rumours on blogs, social networks or websites.

Why does bullying happen?

Bullying is a relationship problem and there can be multiple reasons underlying this phenomenon. Amongst these there are jealousy, envy, different levels of discrimination such as sexual, racial as well as ignorance. At times, there can be selfish reasons and the bully can feel fearful about cultural and environmental norms he or she has to attend to.

Commonly bullying is believed to be happening amongst peers, the truth is that at times it can be done by adults to minors. Having said that, some coaches believe that in order to increase mental toughness, enhance performance when feeling under pressure players or athletes need to be bullied.  This aims at dismantling their individual identity to focus on the goal of the team above all.  Although these last purposes might appear justifiable to some, bullying negatively affects athletes’ passion and drive for that sport and this can result in athletes to quit.

At times bullying is underestimated because aggression is expected in some specific sports. Competitive sports are viewed as an opportunity to develop skills such as self-discipline, ambition and drive to success. Yet in some cases competitive sports may be characterised by a stressful environment and go on to promote negative attitudes and conflict.   Additionally, bullying can be encouraged and modelled by coaches, parents and influential team-mates.  Bullying is accompanied by shame and fear and therefore is often not talked about because athletes do not want to appear weak and vulnerable or may be worry about the consequence.   An example, in football can be about team initiation, abuse and humiliation of new team players in order to be part of team and be accepted by team mate.  The victim is expected to put up and agree with the violent or embarrassing activities requested to perform. Needless to say that these destructive activities negatively affect the person’s well-being and the enjoyment of being part of that football club and team. Therefore athletes start to lose focus, concentration and either change the club or quit that specific sport.

Although many football associations and clubs have a zero tolerance policy for bullying, as previously mentioned, at times coaches are the bullies as they go on to humiliate and punish players as a way to teach discipline, toughness and competitiveness. This view is adopted despite being highly detrimental for athletes especially younger ones.

When athletes play at a higher level social media can be particularly cruel and destroy the athlete’s image and reputation affecting their self-esteem as well as there performance levels.   The same can happen from fans who during matches shout nasty names, make rude comments and express great disappointment when players make mistakes.  Least but not last, particularly in youth sport parents can play a significant role in creating a healthy culture around sport or the opposite can be true where young athletes develop negative feelings about their sport which goes on to affect their enjoyment.

In short, bullying is a form of traumatisation and these memories can stay locked in the emotional subcortical brain affecting low self-esteem and performance.

Below are 3 tips to beat the bullies:

If you have found this blog useful and are interested in learning more about how to deal with bullying feel free to sign up to the “The Mental Edge”.

To get in touch for one 2 one Clinical and/or Sports Psychology Coaching with Alessia Bruno.  ONLINE calls are available.

You can also join our community – THE SPORTS PSYCHOLOGY HUB – for regular Sports Psychology tips, podcasts, motivation and support.