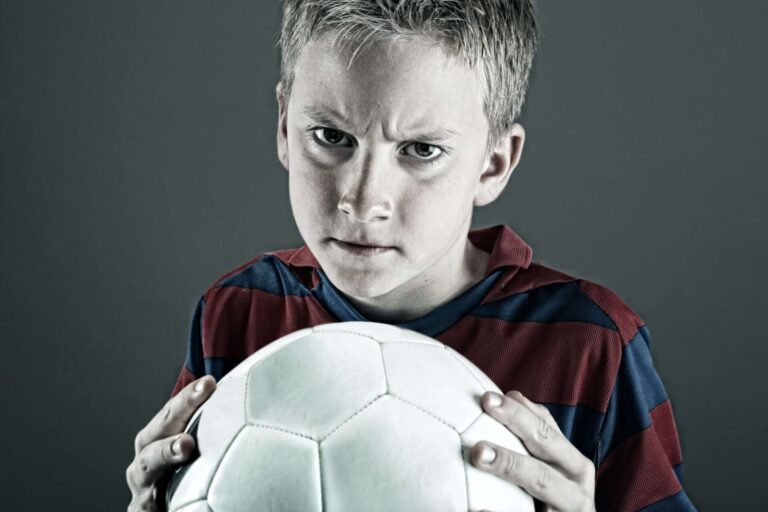 Sports Psychology Tips: How to Support an Angry Young Athlete

Anger is generally viewed negatively BUT…

When we’re young, as children we often bite, push, shove, hit, kick and throw things in a rage.  They’re normal behaviours that simply come with the territory of being a young child or infant.  This is often the starting point of why many people see aggressive behaviour as a negative.  Many parents yell at their children during these episodes, punish them or can get caught in the trap of labelling them “naughty”.

Yet for most children these episodes are simply down to biology where they’re trying to tell us something but can’t express it.  Their brain is underdeveloped so they can’t control their impulses, regulate their emotions and understand the consequences of their behaviour.

Often these angry episodes will occur when:

Now when we think about this in sporting terms as we get older some of the causes of aggressive behaviour may be down to:

Typical responses depend on the individual sport however are often visible with:

How well do you deal with angry responses?

It’s very easy as a parent or as a coach to consider the cause of the behaviour but then how we go on to support children is often not so easy and could be handled better.

You often see a parent or coach berating a player for bad behaviour similar to what happens to infants, punishing them, often because it dents their ego or causes them embarrassment.

I’d question is this approach actually going to help the player moving forward?  Will they learn their lessons and improve the way they deal with these types of situations?  I’m doubtful.

For example, Jonny, a midfielder, is playing football in a semi-final and watches his goalkeeper make a mistake so his team go on to lose the important match.  To Jonny this is huge, it’s his world, he and his team now won’t be in the final.  Jonny goes off the pitch sulking and then kicking water bottles in a rage.  He argues with some of his team-mates and coaches too.

So the coach gets angry and shouts at Jonny.  His parents get wind of his “bad” behaviour and punish him.  They stop him from playing football for 2 weeks and are very critical of him.

The problem with this approach is Jonny now feels ostracised and alone to deal with the issue.  He isn’t shown how to work through this and what would have been a better approach.  By simply being told he shouldn’t have done behaviour A. Or he shouldn’t have done behaviour B.  Or his team-mate Tom didn’t do such a thing, he handled it much better so why can’t you (Jonny) be like Tom.  All this does is wind Jonny up and adds to his already normal critical inner voice.  His self-confidence and self-esteem is harmed as a result.

What would a better approach be?

The coach or parent could firstly look to identify the triggers (the goalkeepers mistake, losing an important match) and acknowledge why Jonny behaved like he did in a calm manner.  Then consider any emotional cues, by showing Jonny some empathy, love and support.  Conversations in a calm manner may take place about Jonny’s expectations of himself and others and factors that are inside  and outside of his control.

By approaching Jonny in this way, Jonny is more likely to learn to face and deal with his emotions better.  He will also likely learn to respect himself and others more, not because he is told too but because he feels supported, truly understands it and has experienced what it feels like personally.

Moving forward yes he will still likely mistakes, as children do, Jonny won’t be “perfect” however the more compassionate approach will help him learn how to express his emotions in a safer way and slowly he will learn how to do it without anyone’s help.  It won’t happen overnight however with consistent support and reassurance from parents and coaches in this way it is more likely to happen.

Studies show that when human beings are hurt emotionally, our thinking brain can shut down.  So when we cannot think, we cannot learn.

Another example is Jack a promising centre half, who was part of a football academy.  Jack had an accident where we broke his leg away from football 12 months ago, on returning back he was worried about tackling and contact with players.  If he saw he was up against more physical players this scared him.  In his head he would tell himself I don’t want the ball, so he’d often go missing.  Prior to his injury he would shout and demand the ball, his movement used to be excellent too.  But he was no longer the same player.  As a result he often got angry with himself and team-mates out of frustration, swearing and then going on to allow his head to go down.

Coaches at the club thought they were being supportive, however their behaviour wasn’t consistent.  One day they’d be nice to him, the next he would be criticised and shamed in front of the rest of the players.  Other days they would give him some time to talk then other days he’d be ridiculed, sarcastically being labelled as “soft” to try and motivate him.  Then there we days he’d be threatened with being moved on to try and get the best out if him.

His parents found it very difficult to watch and were helpless.  Despite being well meaning, they would often be at the end of their tether and lecture him on what he should be doing or point out what his team-mates were doing too.

All the while, Jack’s confidence got more and more brittle and to the point when he considered quitting the sport he used to love.

Back to my point about the fact our thinking brain shuts down when we’re hurt emotionally.  All Jack is likely to be doing is recording in his brain the behaviour that is being modelled to him.

So when the coaches and his parents are trying to help him by criticizing, lecturing, shaming, ridiculing, giving orders, screaming, or threatening all he is doing his recording in his memory bank is bullying behaviour.  He’ll be able to visualise this behaviour easily moving forwards, he’ll likely feel the emotion internally, hear the sound and tone of the voice and so on…  Not the behaviours that he need to rediscover such as:

It’s a tough job being a coach and a parent, often our behaviour comes from what we were taught and what we modelled growing up.  The phrase “or else” for one is bandied around a lot.  From Jack’s viewpoint all he sees is a big person standing in front of, who he is told he “must” respect yet he is being spoken too in an intimating way.  For Jack this person is bigger and stronger and this can be frightening.

I sincerely hope that you’ve enjoyed reading this article, found it useful and it’s helped you consider your approach and reasons for why you react the way you do.

If the only way we can get children to do what we ask is by intimidating them with our greater physical size and power, how will we get them to do as we ask when we are no longer bigger and stronger?

Please do get in touch if you’d like to chat about this article.

Or take a look at our blogs created especially for parents and those invested in youth sport.

If you’re enjoying reading my sports psychology blogs, please do forward them on to other players, coaches, or parents who would appreciate them.