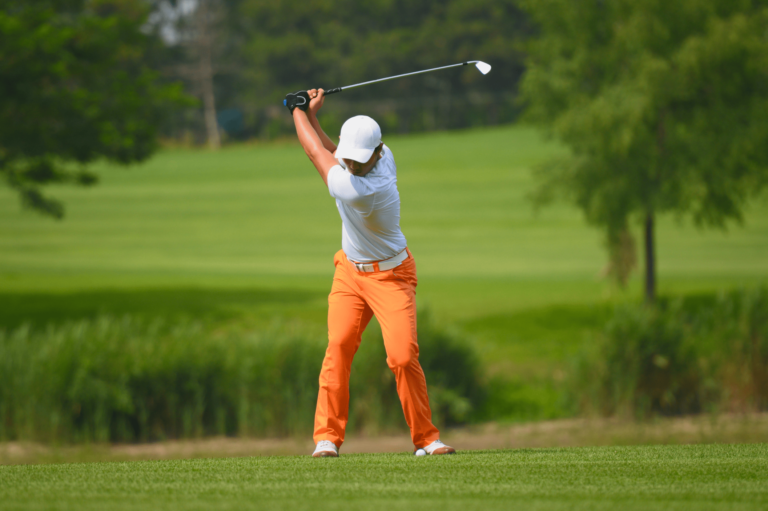 A 24 year old talented professional golfer based in Northern England who had played golf since he was 9 years old.

The client had a disrupted season due to an injured wrist caused by over-practicing as he had a love for hitting balls on the range.  He’d been back playing for 2 months when I received a call.  He was a little frustrated with his form when he had performed in PGA events and on different professional tours.  He felt that he was practicing very well and was performing in his words “okay” in events however he was struggling to turn 71’s into 69’s or 68’s into 64’s.

We met 5 times over a 2-month period, in total for 10 hours.  The sessions included face to face on course and short game work, zoom strategy sessions, zoom sessions whilst he was on the range, short game area and putting green.

++ Note on some occasions he was unable to practice the grounding or mindfulness exercises because the opportunity didn’t present itself.  He distracted himself by talking to his caddy or playing partners.

Example of process goals and how he used them in practice.

If you enjoyed reading this case study and would like to learn more about how I could help you and your golf career why not get in touch or sign up to the Mental Edge for regular tips and advice.

How to Overcome Mental Blocks in Football

How to Overcome Mental Blocks in Football Dan Abrahams is a sport and performance psychologist. A former professional golfer, Dan has 25 years experience in high performance sport, and has spent the last 15 years as a qualified sport psychologist working with some of the best sports competitors in the world. He has held several

Using ACT and Mindfulness to Improve Your Sporting Performances

ACT in Sport, Improving Performance through Mindfulness Dr James Hegarty has a wide range of experiences as a Clinical Psychologist and a long standing interest in Sports Psychology.  Throughout his career he has worked with sports people, from passionate amateurs through to professional athletes.  He was an early adopter of Acceptance and Commitment Therapy/Training, and

How to Transfer Your Cricket Skills to Matches

How to Transfer Your Cricket Skills to Matches Jarrod Leathem is based in the Gold Coast in Queensland, Australia.  He enjoys supporting batsmen, in cricket, as a performance coach and is the founder of the popular High Performance For Batsmen Facebook Group. Whether you’re a batsman or bowler, a wicket keeper or a fielder the